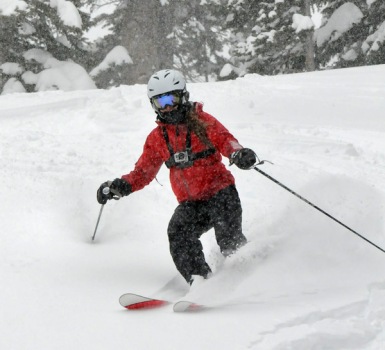 Can you take the kids to school tomorrow morning?  I’m going Cat Skiing.  Really?  Thanks, sweetie. [click]  About 4 seconds later, it hit me that I was going to cat ski the next morning at Snowbird.  I freaked.

I am not an expert skier.  I’m a 40-something mom who learned to ski as an adult and, until moving to Utah 3 years ago from Hades, I mean, Houston had clocked less than two dozen days on a mountain.  What in the world made me think I could jump into a snowcat and ski deep virgin powder in Snowbird’s side and backcountry?  The same thing that’s probably going through your head now – because I really wanted to believe that I could.

They yearn for what they fear for.  Quoting The Inferno is rarely a good sign in any endeavor.  For the next few hours before bed, I battled with my imaginary demons debating whether I could pull this off.  I went as far as calling another Skimum, Nicole, to take my place.  “I really have a lot to do.  You’d be doing me a favor if you could go.”  Seeing right through this ruse, she shrugged me off, “It’s not heli-skiing!  This is much easier…  You’ll be on gentle terrain… You’ll be fine…You’ll have a blast.”  This put my mind at enough ease to drift to sleep.  Only as I was driving up Little Cottonwood Canyon the next morning did I recall that this is the same woman who convinced me to mountain bike the Wasatch Crest Trail, and when I later asked why she failed to disclose that it was 23 miles long, Nicole innocently replied, “Oh, because I knew you wouldn’t do it if I told you.” 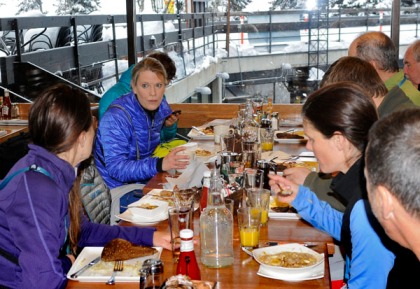 Arriving at the Forklift Restaurant at 7:30am, I was greeted by Snowbird Snowcat for Nature guide and ski patroller Spence, who offered me a seat, handed me a breakfast menu, a waiver and a beacon.  Abandon all hope ye who enter here, I mused to Skimum Julie, who was sitting beside me chatting away with the 10 other guests about whether to rent some powder skis for the day (she did).  I’m not sure whether it was the breakfast, which was delicious, the caffeine and adrenaline coursing through my veins or just the there’s-nothing-I-can-do-about-it-now feeling you get when they pull down the body restraint on Space Mountain, but I was surprisingly calm for the rest of the day … and had an incredible time.

You felt from the start that Spence and his partner, Rex, knew exactly what they were doing, and what you would be doing.  They told you the plan, that they had already scoped out the terrain and that they would let you know of any concerns or contingencies that arose.  I could just kick back, enjoy the ride and ski “The Greatest Snow on Earth.”  This was probably the biggest revelation of the day – that I was responsible for my skiing and nothing else.  This was a well-choreographed day by professionals that understood the mountain, its conditions and its risks.  That did not mean that there weren’t any dangers.  No, no, no, this was not Disneyland!  It reminded me of a guided safari my spouse and I took in an open Land Rover in South Africa several years ago.  The goal of the guides was not to prevent the lion from jumping into your lap but to place you in the best position for you to appreciate the spectacular environment around you.  The snowcat experience allows you to feel the thrill of skiing three feet of fresh powder not easily accessible (and without all the hiking and skinning) with the aid of experienced Snowbird guides who, like my African trackers that could locate The Big 5 from twigs and guano, knew how to sight the lines and where to find some of the best ski terrain in the world. 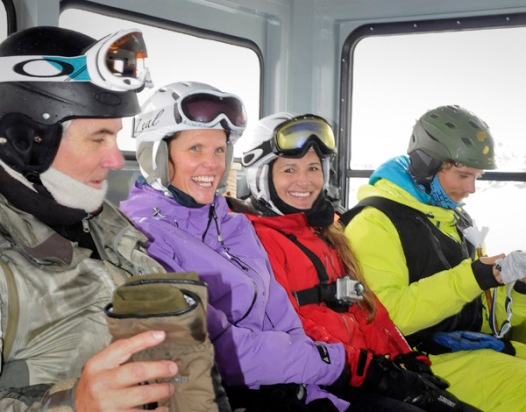 Skimum Nicole was right about the terrain.  It wasn’t as difficult or steep as I fearfully dreamt.  The toughest run was one of the first ones we took in Mineral Basin past Alter Bowl.  It’s officially Double Black in that area, but it was wide with few trees, and felt like any other Bookends run.  Not having a lot of powder experience, I took bigger turns than most but stayed upright giving a respectable performance to my co-adventurers below.  From the bottom, we jumped into the snowcat and headed toward the opposite side of the circular basin to ski the areas Spence identified as Sinner’s Pass and Pagan’s Basin.  With Dante still humming through my brain from breakfast, I found great humor in this while starting to wonder if there was more to this journey than I originally thought. 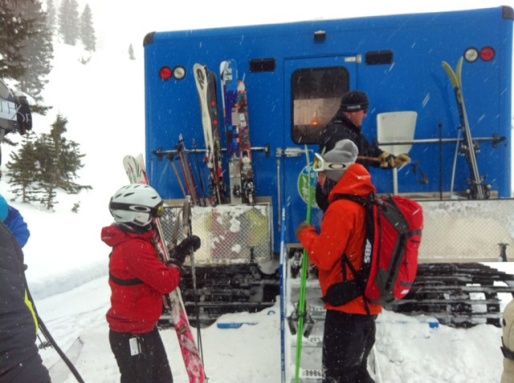 From there we came outside and saw the stars, would have been a more appropriate verse at that moment.  There were no stars.  In fact, the sun was completely obscured by clouds that day, but the absolute quiet of the old growth Wasatch forest spared from mining or development on this winter day cast a cathedral-like awe among my fellow snowcatters.  As we snapped into our skis, we were simultaneously overcome by the stillness and fullness wrapped around us.  Trees, snow, and sky, the immensity of which was profound and humbling, encapsulated us.  We had become an infinitesimal part of our surroundings with no more meaning than any single flake at our feet.  We were entering Paradise. 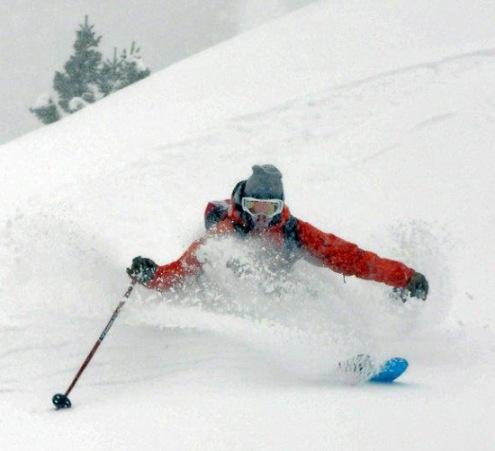 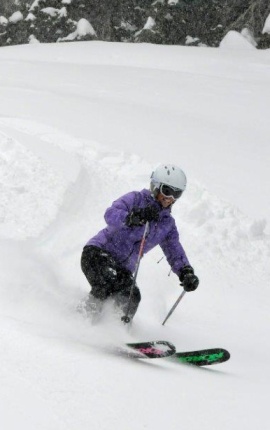 Skimum Julie riding some “fatties” for the first time.

Floating down each run was exhilarating.  With no one around you, no trails marked, no end in view, there was a feeling of freedom rarely felt in everyday life.  You didn’t have to be an expert skier to enjoy it – you simply needed to be present to appreciate it.  That said, I wish I were a better powder skier insomuch that I was exhausted by the final run at about 1pm.  I suspect, however, that I would have been spent regardless.  Whether it’s a once in a lifetime experience or an annual pilgrimage, to cat ski is to leave your everyday behind and to embrace something bigger and more extraordinary, to leave everything on the mountain and go home refreshed and renewed.